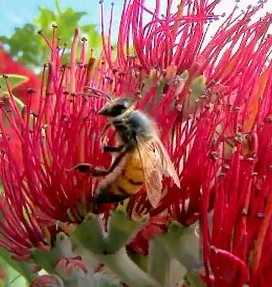 While industries continue to pollute the planet with their toxic chemicals, toxic waste and toxic spills, Earth’s pollinators sing a swan song that leaves no doubt as to the folly of modern civilization. Our ability to hear and appropriately respond to the crisis of declining pollinators will determine humanity’s survival.

“In 1923, Rudolf Steiner, an Austrian scientist, philosopher and social innovator, predicted that in 80 to 100 years honeybees would collapse.” Queen of the Sun

Steiner believed the industrialization of bees would lead to their demise. It looks like he was right. In recent years, the United States has lost between 100 and 300 billion bees, and the problem has spread to Europe and beyond. While industrialized beekeeping operations do kill millions of bees each year, several other factors contribute to their massive die-off.

Pollinators are further sickened by lack of a diverse diet from the tens of millions of monoculture acres. By ingesting genetically modified crops, pollinators also ingest GM microbes, to their detriment. By and far, though, agrochemicals contribute most to pollinator decimation. In a last ditch effort to save the hive, some bees seal off hive cells that contain inordinate amounts of pesticide. But even these hives eventually die.

Bolstering industry’s multi-factor assault on nature, the ubiquitous communications industry adds electromagnetic pollution, causing bees (and birds) to lose their ability to navigate. Taking advantage of weakened, disoriented bees, exotic pathogens like the Varroa mite, imported via globalized trade, suck the remaining life out of them. And, so, we see the collapse of the honeybee and North American bats.

Much of this we learn in Taggart Siegel’s part philosophical love story, part documentary, Queen of the Sun: What are the bees telling us? Theatrically released on March 25, the award-winning film is further supported by a newly released report from the United Nations Environment Programme, Global Bee Colony Disorders and other Threats to Insect Pollinators.

A sure way to collapse an ecosystem is to decimate a keystone species – one from which the entire localized web of life radiates. Pollinators contribute nearly ten percent to the global food economy, or about $218 billion USD (€153 billion) a year. Of the 100 or so crop species that provide 90% of the world’s food, bees pollinate 71 of them, according to UNEP’s report. Among the 20,000 known bee species worldwide, the honeybee, Apis mellifera, is most important, contributing between $33 and $82 billion annually (€22.8 to €57 billion).

So while we are witnessing the planet’s sixth extinction spasm (popularly detailed in Ed Wilson’s The Diversity of Life), it is the bee that garners our deserved attention.

“Bees are the legs of plants,” Michael Pollan explains in Queen of the Sun. They co-evolved so that the sessile organism feeds the aerial one in exchange for propagation. That mutualism supports much of life today. Without pollinators, crops will collapse. As crops collapse, myriads of species, including humans, will starve.

The collapse of flowering plants will initiate a chain reaction dying that can easily lead to the end of the Age of Mammals. This would be similar to the end of the Age of Dinosaurs some 65 million years ago. The “terrible lizards” will have outlasted us by 100 million years. Only about half of all species survived that last extinction spasm – notably alligators and crocodiles. But human survival is hardly guaranteed if 40% of our food sources vanish. While gators and crocs can go a year or more without eating – and this survival mechanism vastly contributes to the species’ longevity – humans cannot.

“It is increasingly difficult for pollinators to obtain sufficient pollen sources for all their essential amino acids. Consequently, this can weaken the insects’ immune system, making them more vulnerable to various pathogens.”

In Queen of the Sun, several speakers have no doubt that GM crops kill bees. When plants are genetically altered (via a crude gun method), the process is so unreliable that only one out of thousands of cells transmutes. Dr Vandana Shiva explains that, because of this, antibiotic resistant genes and viral promoters have to be added. “Every genetically engineered seed is a bundle of bacteria, toxins, and viral promoters.” 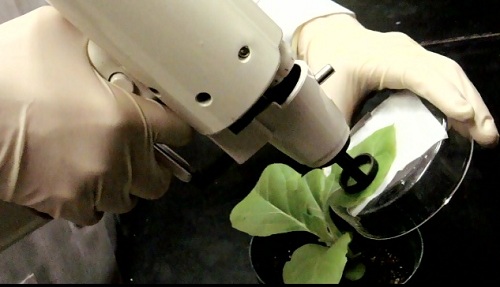 These GM bacteria, toxins, and viral promoters are transferred into our gut (and that of bees), where they continue to function within the host. Only now, we’re the host. The bee is the host. And bees aren’t doing so well. Science has shown that high fructose corn syrup, a GM product fed to bees, inhibits genetic expression of immunity and detox functions.

Queen of the Sun highlights the delicate balance among the various members of an ecosystem, making the point that genetic integrity is required for the system to work. In order for the bee (or the flowering plant) to be the best at what it does, its DNA must remain intact.

Both the film and the UNEP report leave no doubt that the collapse of pollinators is the most urgent problem facing humanity today. Both make several suggestions to agribusiness and individuals, including: Stop (or greatly slow) the use of pesticides, grow bee friendly crops, buy organic, provide habitat and fresh water, and become a sustainable beekeeper. The UNEP report notes that pollinator conservation efforts should also plan nursery habitats, since the requirements of larval stages differ from winged adults.

Given that bee and bat decline is most severe in the United States, which has the longest history of deploying GM crops and which uses more agrochemicals than any other nation, the culprit seems pretty obvious. The top six agrochemical companies, Syngenta, Bayer CropScience, BASF, Monsanto, Dow Agrosciences, and DuPont, also spread genetically modified crops.

Pollinators are keeping score of the corporate war on nature. They are telling us that pesticides, biotechnology, and cell phones are winning. The tragedy is that when pollinators go, so will flowering plants and, likely, the Age of Mammals.

Check here for a list of upcoming screenings and see this list of 10 things you can do to help bees.