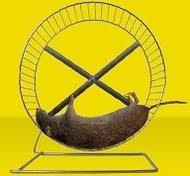 Superweeds are dominating the discussion at the American Chemical Society (ACS) symposium, being held in Indianapolis thru Sept. 12. Not surprisingly, the solutions proposed include different toxic brews in tandem with stacked genetic traits in a never-ending chemical arms race with Mother Nature.

Though superweeds have been a growing problem for several decades (with the advent of chemical farming), the transition to genetically modified crops and the requisite reliance on glyphosate has turbocharged the problem. Chemist Harry Strek of Bayer CropScience explains:

“Beginning in the mid-to-late-1990s, crops containing genetically-engineered glyphosate resistance exploded onto the market and rapidly became the dominant and then the only weed control measure in the majority of American cotton, soybean, and corn crops. The number of alternative products used for weed control dropped significantly and resulted in a high level of selection pressure for resistance.”

Young must have missed those classes explaining how bio-resistance works. Repeated use of the same class of pesticides to control a pest (whether weed or insect) can lead to artificial selection for pesticide resistance in the gene pool. Those whose genes allow them to survive the pesticide reproduce. It’s simple and undeniable. You wouldn’t have herbicide resistant superweeds without herbicides.

Citing a recent study out of the University of Washington, filmmaker Zofia Hausman told me, “Herbicides do in fact create herbicide resistant crops!” In the final stages of production, the documentary, The Agtivists, should be released Spring 2014.

U. of Wash. researcher Charles Benbrook measured pesticide use since the advent of GM crops, finding:

Benbrook warns, however, that insect resistance is now climbing, which will spur farmers to use more insecticide.

Plant pathologist Dan Kittle, also speaking at the ACS symposium, lauds GM crops “that are lower in saturated fats, the bad fats linked to heart disease, and high in the healthier monounsaturated fats.”

But at what cost?

Glyphosate has been linked to harm in mammals, insects, annelids, fungi and other soil biota. It’s associated with emerging soil pathogens that have been linked with spontaneous abortion in livestock and depressed immune function in frogs, bats and snakes. It’s also killing our bees and butterflies, probably the most serious threat facing humanity’s food security.

Nearly 200 million pounds of glyphosate were sprayed on US soils in 2007, reports Stephanie Seneff, a Senior Research Scientist at the MIT Computer Science and Artificial Intelligence Laboratory. Her research focuses on the intersection of biology and statistics. Working with other scientists, she believes the spike in US autism can be tied to glyphosate use.

In an interview with author Catherine Frompovich discussing her new study, Seneff explained how she and environmental toxin expert, Anthony Samsel, show how:

“[G]lyphosate exposure in both the mom and the child could lead to autism. But, in addition, we realized that it could also explain a host of other problems that are reaching epidemic proportions in this country, such as obesity, depression, gastrointestinal distress, and Alzheimer’s disease.”

Commenting on both studies, Hausman urges, “We cannot continue to turn a blind eye to the assertion by the chemical industry that glyphosate is minimally toxic and reduces herbicide usage when new evidence to the contrary is coming to light. It is vital that restrictions are put in place now if we are to heal and repair the damage caused by the overuse of pesticides on the delicate and perfectly designed system of our top soil.”

While the chemical industry offers chemical solutions for superweeds, the most effective and least ecocidal ones may be mechanical.

A weed ecologist with the University of Nebraska has suggested weed-smart field robots to dispose of them. Steve Young is confident that more herbicide will lead to stronger resistance and more chemical runoff. But with his robots:

“The computer would know what species it’s dealing with, the appropriate weed-control tool, and you’d be done with it.”

Permaculturists like Sepp Holzer do without chemicals in their farming operations. (Review here.) Instead, entire self-sustaining ecosystems are built while considering water, wind, sun, soil, wildlife and terrain, as well as climate and nearby pollution sources. Companion plants, cover crops, terrain slope and wildlife serve as natural pesticides.

Albert Einstein would likely point to agroecology if responding to the problem of herbicide-resistant weeds: “We can’t solve problems by using the same kind of thinking that created them.”