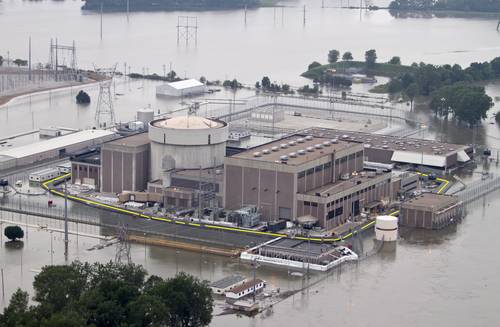 Overwhelmed by the rising Missouri River, a 2000-foot stretch of a protective water balloon, surrounding the Fort Calhoun nuclear power plant in Nebraska, collapsed at 1:25 AM on Sunday, June 26.

Two days earlier, Kansas State University reported an emergency when radiation leaked at 149 times the Derived Air Concentration (DAC) limit for Iodine during a trial run of its reactor.

Six and a half hours after the Ft Calhoun water berm collapsed, operators reported it to the Nuclear Regulatory Commission, registering it as a “non-emergency.”

The NRC says there’s nothing to worry about. The flooding has “had no impact on the reactor shutdown cooling or the spent fuel pool cooling.”

Operating since 1973, Ft Calhoun filled its spent fuel cooling pool to capacity in 2006. The structure is 40 feet deep and 38 feet above ground. Ft Calhoun then built a dry cask storage facility, circled below, which the NRC says does not need the AquaDam water berm: 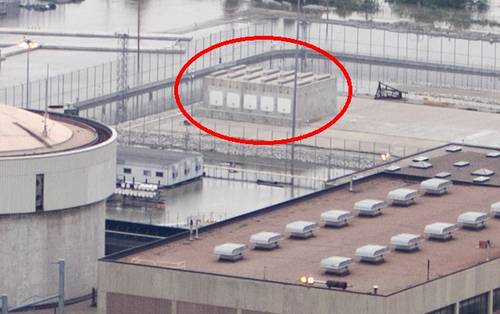 On June 15, we first posted news about the threat to Nebraska’s nuclear plants, amid an apparent media blackout on the story. On June 23, the AP released its report of a year-long investigation into US nuclear plants indicating that 75% of them leak radiation.

Indeed, when Kansas State U ran its research reactor for 25 minutes on June 24, air quality monitors sounded the alarm that Iodine radiation had exceeded the DAC limit by 149 times above allowable levels, prompting KSU to declare an emergency.

Though four different systems caught the excessive radiation levels, operators reported their belief that this was due to the proximity of a radioactive sample near the monitors. They did not disclose what kind of sample nor why it was near four different monitors, if that’s even possible. Plus, the sample they discuss showed Cesium, not Iodine.

On May 31, NRC Chief Gregory Jaczko defended the NRC against allegations it is too closely allied with plant operators. He cited several examples where plants were ordered to hasten work on long overdue safety measures and applauded the NRC for its “transparency and openness.”

That transparency and openness didn’t apply to the events at both Nebraska’s nuclear power plants until after our June 15 article. It took a week for the NRC to mention it.

On June 21, Jaczko reported that the NRC ordered Ft Calhoun to beef up its flood response plan last year. He is confident that “the plant is very well positioned to ride out the current extreme Missouri River flooding while keeping the public safe.”

That same statement was reissued on June 26 after the collapse of the water berm, which is clearly part of Ft Calhoun’s flood response plan, along with sandbags and a mound of earth piled around the plant.

Nuclear engineer Arnie Gundersen says that “sandbags and nuclear power plants should not be in the same sentence.”

Keep in mind as these events unfold that nuclear power plants provide about 40 years of electricity while producing radioactive waste that lasts thousands of years. Despite this reality, the NRC is currently developing plans for safe storage of nuclear waste up to only 300 years. (See SECY-11-0029)

Chief Jaczko joins with Senator Harry Reid and President Obama in refusing to bury the nation’s nuclear waste at Yucca Mountain, which has long been deemed unsafe. Funding for the project was cut in 2010, though the issue is still mired in litigation.

Off planet is the safest repository, given the danger posed to Earth by millennia of radioactivity. Professor Benjamin Sovacool calls nuclear energy the deadliest, costliest form of energy on record, showing that, on average, there has been one nuclear accident resulting in at least $330 million in damage every year for the past 30 years.

“The meltdown of a 500-megawatt reactor located 30 miles from a city would cause the immediate death of an estimated 45,000 people, injure roughly another 70,000, and cause $17 billion in property damage.”

Check back with us for updates.