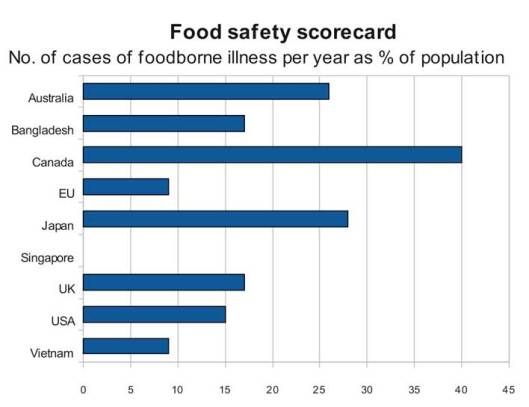 A research group that supports community-controlled and biodiversity-based food systems, GRAIN, has released a global report, Food Safety for Whom? Corporate Wealth vs. Peoples’ Health, showing how governments and corporations use “food safety” to manipulate market access and control. Rather than making food safer, domestic and trade rules “force open markets, or backdoor ways to limit market access.”

“Across the world, people are getting sick and dying from food like never before. Governments and corporations are responding with all kinds of rules and regulations, but few have anything to do with public health. The trade agreements, laws and private standards used to impose their version of ‘food safety’ only entrench corporate food systems that make us sick and devastate those that truly feed and care for people, those based on biodiversity, traditional knowledge, and local markets.”

Canadian raw milk producer Michael Schmidt makes a brief statement about these fake food safety laws that violate food freedom in this video (though he confuses “food freedom” — the right to choose your food, with “food sovereignty” — the right of a nation to determine food safety standards and appropriate ag technologies despite trade agreements):

In the next video, Paul Noble discusses raw milk and government intrusion. “If God had intended us to drink pasteurized milk, he would have put a pasteurizer on the cow.”

GRAIN notes, “During US President Obama’s visit to India in November 2010, Indian Agriculture Minister Sharad Pawar made it clear that the United States can produce all the scientific studies it wants, and they will be respectfully reviewed, but India will not import US dairy products that offend domestic religious sensitivities.”

That corporations control governments is undeniable, and we see this with the Food Safety Modernization Act. On May 4th, citing the FSMA for its authority, the US Food and Drug Administration declared it can seize food without evidence of contamination, which violates the U.S. Constitution protecting citizens from unreasonable search and seizure.

But strict food standards disappear when it comes to genetically modified foods:

“At the trade negotiating table, the US government is well known –and feared– for pushing lax standards on genetically modified foods. Indeed, a diplomatic cable uncovered by Wikileaks shows that the George W. Bush administration pressured the French government to ease its stance against GMOs. In a 2007 cable, the US ambassador to France went so far as to suggest that ‘we calibrate a target retaliation list that causes some pain across the EU since this [acceptance of GMOs] is a collective responsibility, but that also focuses in part on the worst culprits.’ He added: ‘The list should be measured rather than vicious and must be sustainable over the long term, since we should not expect an early victory.’

“Such ‘diplomacy’ is for the clear and direct benefit of Monsanto, DuPont and other agricultural biotechnology corporations that do not like foreign countries banning GM seeds or foods, much less requiring labels that inform consumers of the presence of GM ingredients. US firms, especially the members of the Biotechnology Industry Organisation, religiously use FTA talks by Washington officials as a platform to secure market access for GMOs through aggressive regulatory reforms.”

Though the FDA makes a big deal of improper labeling, it refuses to label genetically modified foods in the US. This only serves biotech corporations, since 95% of the population wants GMO labeling.

“Besides GMOs,” GRAIN continues, “US trade policy is also seen as destabilising other countries’ sovereignty over food safety and health matters, insofar as Washington regularly demands relaxation of rules against the import of US farm products that others deem risky, such as beef (BSE, hormones), veal (hormones), chicken (chlorine) and pork (swine flu).”

Chlorine is a known carcinogen. It reacts with and is retained by muscle tissue, but especially chicken fat and liver. It is a boon for the poultry industry, though. Chlorine treated chicken carcasses weigh more than those treated with unchlorinated water. Russia is among several nations that reject chlorinated chickens from the U.S., as we covered last September.

Regarding BSE, or mad cow disease, GRAIN notes that a new case was confirmed in Canada in March. Cows fed their normal diet of grass do not acquire BSE, but industrialized operations use grain mixed with slaughter waste. Though this has been known for years, corporate food refuses to change.

“With the pesticide industry so intimately involved in developing and implementing supermarket standards, it’s hardly surprising that pesticide contamination remains prevalent on supermarket produce. Tests done by Greenpeace in China in 2008 and 2009 on popular vegetables and fruit found far more serious pesticide pollution on those collected from Walmart and the other major supermarkets than on those collected at wet markets.”

GRAIN also focuses on the rising number of indigenous movements resisting “corporate food safety” from the jungles of the South, to rural Maine towns declaring food sovereignty, to major urban centers across the globe. Like a feedback loop, these small, localized movements foster a growing sense of self-rule:

“The Korean people’s resistance to US beef has grown into an expression of profound distrust toward Korea’s system of representational democracy, including the state’s relationship with the US, not an irrational fear of prions. In Australia, the campaign has been more about keeping Australian food within Australian hands, a concern that many peoples across the world share with regard to governance and control of their own country’s food supplies.

“As to anti-GMO struggles, they are as diverse as the anti-US beef campaigns, but they have also been about profound issues of democracy, the survival of local cultures and food systems against the onslaught of Western ‘solutions,’ about keeping seeds and knowledge alive in communities’ hands and challenging whole models of development.”

“Many producer organisations and consumers groups, not to mention large movements like Slow Food, are convinced that biodiversity and ecological complexity – as opposed to extreme hygiene – are the keys to healthy and stable systems. Nature abhors a vacuum, after all. Of course, these sounder approaches to food safety also rely on short distribution circuits, getting food from the farm or the small-scale processing plant into people’s homes through less complex, more direct distribution schemes (food clubs, all sorts of community-support agriculture systems, co-ops, and so on).”

Heat destroys enzymes; cooked milk lacks the probiotics that make milk a natural wholesome food. The U.S. requires that milk be pasteurized if sold across state lines. Not only that, but the same milk is adulterated with genetically modified ingredients and antibiotics.

GRAIN concludes that “we may want to stop talking about food safety altogether and assert instead our own demands for food quality, or something similarly more holistic. Food safety, or food quality in broader terms, is a ground on which big corporate agriculture and supermarket cultures cannot outperform small producers and local markets. The challenge is to ensure that the small and the local can remain alive and turn today’s heightened concerns for food safety in our favour.”

The report is timely and relevant and a must-read for those who want a global picture of the move to control the world’s food.

A version of this article first appeared at Global Research.