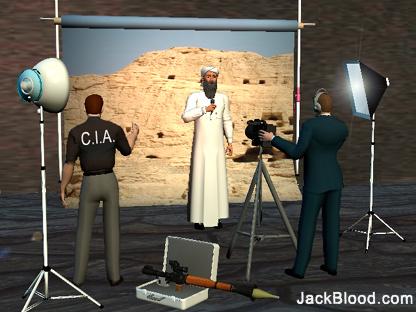 The White House announced tonight in a special mystery broadcast that a bullet wound to the head killed Osama bin Laden last week. Amazing. Not that Obama is lying, nor that Osama is dead. But that a man on dialysis since at least 1998, on the run from the most technologically advanced military in human history, survived until 2011 in rugged terrain with — no doubt — interrupted access to kidney care.

Yeah, that’s a medical miracle. That was a good laugh. I guffawed when Geraldo predicted this amazing news and laughed even harder when it was confirmed. Well, they had to admit he was dead at some point.

David Frost: And in terms of these three people you mentioned [who may be financing or organizing terrorist groups that have targeted Benizir Bhutto for assassination to destroy the Pakistani democracy movement], were they members of or associated with the government?

Benazir Bhutto: Yes, well, one of them is a very key figure in Security. He’s a former military officer. He’s someone that has had dealings with Jesha Muhammad, one of the band groups at Maulana Azhar, who was in an Indian jail for decapitating three British tourists and three American tourists. And, he also had dealings with Omar Sheikh, the man who murdered Osama bin Laden.

Benazir Bhutto was assassinated on Dec. 27, 2007, less than two months after disclosing the above info on Frost’s show. (H/T BrasscheckTV)

And then there’s the Telegraph revealing that the dead OBL pic is fake. This image shows a dead Arab, a live Osama, and a dead Osama. Clearly, the bottom half of the live OBL pic was pasted onto the dead Arab pic. The Associated Press printed the far right image, and later pulled it.

May 6 Update: Given Obama’s mass media blitz denying OBL had kidney disease (instead, kidney stones), I’ve added links above to the assertion that he was on dialysis, which is not used for kidney stones. I also found a Pakistani report saying that Bill Clinton was advised in 1998 that OBL was on dialysis.