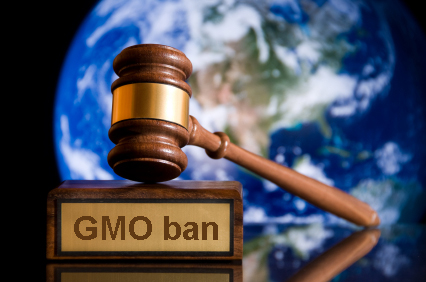 “A new invention to poison people … is not a patentable invention.” Lowell v. Lewis, 1817

A landmark lawsuit filed on March 29 in US federal court seeks to invalidate Monsanto’s patents on genetically modified seeds and to prohibit the company from suing those whose crops become genetically contaminated.

The Public Patent Foundation filed suit on behalf of 270,000 people from sixty organic and sustainable businesses and trade associations, including thousands of certified-organic farmers.

“As Justice Story wrote in 1817, to be patentable, an invention must not be ‘injurious to the well being, good policy, or sound morals of society,’” notes the complaint in its opening paragraphs.

Plaintiffs condemn Monsanto for prohibiting independent research on its transgenic seeds and for its successful lobby efforts to ban GM food labeling. Many raise the specter of allergic reaction to GM foods, proof of which is hidden by lack of labeling. GMO label laws, currently pending in 14 states, would partially remedy this situation. (Please contact your state reps.)

The suit also confronts the propaganda that transgenic seeds improve yield and reduce pesticide use, citing reports on failure to yield and increased pesticide use. The complaint mentions a 2010 lawsuit by West Virginia after several studies contradicted yield results claimed in Monsanto’s ads. And, it notes the growth in glyphosate-resistant superweeds.

Should the court agree that transgenic seeds fail the test of patent law, the suit has the potential to reverse patent approval on all biotech seeds, impacting BASF, Bayer, DuPont, Dow, and Syngenta, and others. Genetic contamination of natural plants occurs where GM seeds are grown, no matter who developed them. Ingesting food which has had its DNA mucked with is dangerous, regardless of who does the mucking.

What makes Monsanto different is its US seed monopoly. Well documented by market authorities, Plaintiffs point out that, “Over 85-90% of all soybeans, corn, cotton, sugar beets and canola grown in the U.S. contains Monsanto’s patented genes.”

Through its monopoly, Monsanto has spiked the cost of seeds in the past decade. Corn seed prices increased 135% and soybean prices 108%, the suit asserts. As recently as 1997, soybean farmers spent only 4-8% of their income on seeds, “while in 2009, farmers who planted transgenic soybeans spent 16.4 percent of their income on seeds.”

Monsanto has also used its dominant position to limit competition from other herbicide producers, as well, the suit alleges.

Listing 23 US patents by Monsanto, Plaintiffs also accuse the firm of “double patenting” thus strengthening its monopoly over the entire field of transgenic seeds:

“Although the United States patent system allows improvements on existing inventions, it does not permit a party to extend its monopoly over a field of invention by receiving a patent that expires later than and is not patentably distinct from a patent it already owns….

“In acquiring the transgenic seed patents, Monsanto unjustly extended its period of patent exclusivity by duplicating its ownership of a field of invention already covered by other Monsanto patents.”

The suit then concludes, “Monsanto’s transgenic seed patents are thus invalid for violating the prohibition against double patenting.”

Here’s the mother of all arguments, which makes the most sense to the lay public. How dare Monsanto sue farmers damaged by genetic contamination of their crops? That’s like a pugilist suing for damage to his hand after he punches an unwilling victim.

Monsanto admits that its product contaminates natural crops. That must be why it recently altered its Technology Stewardship Agreement to transfer liability for its products to the farmers who buy them.

The suit logically asserts that genetic contamination amounts to trespass on the property of those who do not want GE seeds, causing them substantial economic harm.

We saw that when Bayer’s transgenic seeds contaminated a third of the US rice supply, causing the European Union to close its market to US rice. Bayer has faced 6,000 lawsuits due to that contamination and market closure. On top of lawsuits already lost or settled, last month, Bayer lost a $137 million lawsuit by Riceland Foods. The new suit notes that, “The worldwide total economic loss due to the [2006 GM rice] contamination event was estimated at $741 million to $1.285 billion.”

Impact on the Biotech Food Industry

The suit argues that because “contamination is reasonably foreseeable,” Monsanto thus loses its patent rights whenever it sells its GM seeds. This wouldn’t stop it from selling the seed, but it would allow farmers to save seeds from transgenic crops. No company can stay in business without repeat customers, especially ones that spend millions on research and development. And, because transgenic contamination is not limited to Monsanto’s seeds, all biotech seed companies would likewise face dissolution of their intellectual property rights.

Other harm from biotechnology does not stop with Monsanto’s seeds or chemicals, either. To protect the world from the biotech food industry, which extends to animals, patenting life itself should be banned. This lawsuit might take us closer to a return of that legal standard, prior to the 2001 High Court decision in J.E.M. Ag Supply v. Pioneer Hi-Bred International. In that case, Oyez explains:

Among the plaintiffs in the PUBPAT suit is Navdanya International, headed by Dr. Vandana Shiva who has long fought biopiracy. Genetic patents “have unleashed an epidemic of the piracy of nature’s creativity and millennia of indigenous innovation,” Shiva wrote at Navdanya.

The new lawsuit couldn’t come a moment too soon, given the USDA’s recent decision to allow rice modified with human genes by Ventria Bioscience. Such approval begs the question: At what point is the line into cannibalism crossed? Biotech and pharmaceutical companies have produced several hundred “pharma crops” – food that contains vaccines against a variety of diseases. The FDA and USDA would have us ignore that this scheme fails to consider appropriate dosage specific to a person’s age, weight and medical condition, the very foundation of pharmaceutical science.

The biotech industry is out of control, and poses a significant danger to humans and the environment. PUBPAT’s lawsuit marks a significant step toward restoring a safe, sane and consensual food supply.

Rady Ananda holds a B.S. in Natural Resources from The Ohio State University’s School of Agriculture and is the Editor of Food Freedom and COTO Report.