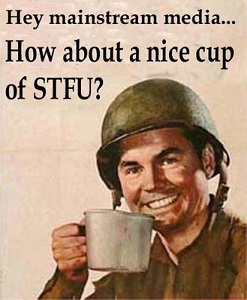 Lately, we’ve seen a massive marketing make-over of environmental modification (ENMOD) programs. What has been a clandestine and hostile military application now is promoted as a “futuristic” solution to corporate pollution. Debunking mass media’s mischaracterization of geoengineering as “futuristic” is in order. Below we take a closer look at those organizations planting such disinformation and offer sources on the harmful effects of geoengineering.

Here is a sampling of quotes from mainstream media on the use of geoengineering:

NYTimes in 2006: “In the past few decades, a handful of scientists have come up with big, futuristic ways to fight global warming…. Their proposals were relegated to the fringes of climate science.”

AP: “Crutzen, who wrote a 2006 scientific article that sparked interest in geoengineering…”

Slate Magazine, Sept. 23, 2010: “Global climate engineering is untested and untestable…. the discipline does not yet exist; it is at best geoscientific speculation.”

James Cascio (author of Hacking the Earth: Understanding the Consequences of Geoengineering) on October 15, 2010: “It does not yet appear that anyone has started to develop actual geoengineering tools…”

Reuters: “None of this … will go forward without ample opportunity for the public to comment.”

In addition to mass media, environmental organizations also promote the idea that geoengineering is brand new.

In a companion piece, “UN Climate Concern Morphs into Chemtrail Glee Club,” Cassandra Anderson was recognized for recently noting that environmental watchdog and geoengineering opponent, ETC Group, is partly funded by the Ford Foundation, which she characterizes as being “known for supporting depopulation.”

Not only has ETC adamantly opposed geoengineering, but also genetic engineering, both suspected depopulation tools. ETC does subscribe to anthropogenic global warming, and believes that geoengineering is being used to halt legislation or treaties that would reduce greenhouse gas emissions. In its 56-page report, “Geopiracy: The Case Against Geoengineering,” ETC warns (p.18):

“For those who previously doubted (or still do) the science of anthropogenic global warming, the geoengineering approach shifts the discussion from reducing emissions to an end-of-pipe solution. Once geoengineering is an option, there is no longer a need to bicker about who put the carbon dioxide in the atmosphere (or ask them to stop).”

Whether or not AGW is real, under a geoengineering scheme, corporate polluters can continue polluting. And this is precisely where climate change skeptics are being led, ETC warns. One high profile climate skeptic, Julian Morris of the International Policy Network, told the BBC in 2008:

“Diverting money into controlling carbon emissions and away from geoengineering is probably morally irresponsible.”

Of course, more than two options exist. A third might be imposing a ban on all ecocidal activities. But, those who oppose both geoengineering and genetic engineering do need to remain wary of any group that supports environmentally destructive practices – including the business-as-usual corporate exploitation of the planet.

To its discredit, ETC denies the existence of current ENMOD programs (p.42):

“One of the reasons the geoengineering debate has focused on research governance is that the technology itself is largely theoretical (there is no actual deployment to govern).” [emphasis added]

Yet, we have the UN World Meteorological Organization saying in a 2007 position Statement on Weather Modification (p.4):

“In recent years there has been a decline in the support for weather modification research, and a tendency to move directly into operational projects.”

And, of course, we have numerous books, films, websites and articles from citizens and experts documenting the existence of such programs.

“Geoengineering is still too contested a field for most big corporate investors, and for many an open association with geoengineering would be a public relations liability.”

Global repugnance over genetically modified foods hasn’t hampered investment in or expansion of the biotech industry. Increasing cancer rates, environmental degradation and public condemnation hasn’t slowed the chemical industry. That statement seems to be thrown in to support the idea that no one is currently engaged in geoengineering. It’s so bizarre, in fact, that ETC contradicts itself in that same report (a page earlier), with a statement that makes sense:

“Those who would have the technical, scientific and financial resources to carry out geoengineering schemes [are] …. well-capitalized governments and corporations.”

Also, researchers have uncovered patents held by the US military, as well as huge defense contractors like Hughes Aircraft and Raytheon (which later absorbed Hughes). Somehow, they do not perceive that a ‘public relations liability’ is at issue when enormous profits or military dominance are at stake.

As stated in Chemtrail Glee Club:

“Delivery systems aren’t the only types of patents related to chemtrails. Aluminum is part of the various metal-chemical cocktails sprayed and is highly toxic to plants, therefore representing a serious threat to normal agriculture. For over thirteen years, biotech scientists have researched aluminum resistant genes in plants, finally isolating one in 2007. Today, a ‘new generation of genetically engineered crop research’ seeks to develop aluminum-resistance in commercial crops.”

Whether ETC Group is one ‘voice of controlled opposition’ or merely has a blind spot when it comes to the extensive history of ENMOD is unknown. Much of what they publish is useful information. Some of it is contradictory, and the notion that we’re not currently being chemtrailed is outright absurd.

I wouldn’t throw the baby out with the bath water, though. It’s likely that a wealth of accurate information can be found in Cascio’s book, Hacking the Earth, even though he also denies that the “tools” exist.

What is obvious is that a major perception management scheme is underway across the political spectrum from climate change skeptics to AGW devotees. Instead of framing ENMOD as a military attack, we’re now discussing it in terms of climate change — a sticking point among populists, some who buy into it and some who don’t.

Over a Century of Cloud Seeding

Though governments, mass media and dubiously-funded organizations still portray geoengineering as futuristic, a wealth of evidence exists that governments and private entities have engaged in the practice for over a century. See, e.g., the sources listed in my July 2010 piece, Atmospheric Geoengineering: Weather Manipulation, Contrails and Chemtrails.

One historian cited, James Fleming, traced military funding of weather modification experiments back to the 1840s. That’s 170 years ago. Small scale rainmaking was successful enough that in 1915, the city of San Diego offered Charles Hatfield an outrageous sum of $10,000 to end their drought. He did, to disastrous effect.

Fleming discounts the ENMOD programs developed during and after World War II, as if technology leapt backwards for several decades until 2003, which is the date he gives to the latest phase of weather modification. He wants us to ignore computers, and all the other advances in science that impact on weather. But, beginning with and immediately following WWII, that is where the bulk of evidence for geoengineering exists, continuing (as reported by mainstream media) for the next 35 years until the UN banned hostile ENMOD programs in 1976.

Then, we have a relative media blackout on the issue until the new millennium. Chemtrail citing increases exponentially after 2000, which coincides with the timeline suggested in a US Dept. of Defense report entitled, “Weather as a Force Multiplier: Owning the Weather in 2025” (reproduced at Federation of American Scientists):

2000 Introduce ionic mirrors, with a sharp increase from 2008;
2000-2025 Use chemicals for atmospheric seeding by civilian (as well as military) aviation;
2004 Create smart clouds thru nanotechnology, with exponential increase after 2010;
2005 Introduce ‘carbon black dust’.

‘Carbon black dust’ may be the topic of this 2007 observation in the Gulf Coast of Florida. A vacationer noticed “black beams” in the sky and snapped several photos, describing the behavior of the beam. Here’s one photo:

This next image also shows what may be ‘carbon black dust’ but its date and location are not given (from Glenn Boyle’s Strange Days Strange Skies): 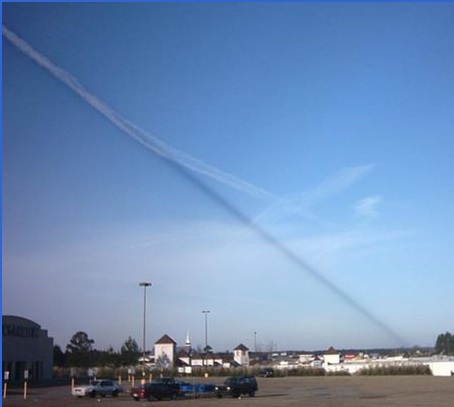 According to “Owning the Weather,” carbon black dust is deployed via jet over large bodies of water “upwind from coastlines with onshore flow” to “enhance rainfall on the mesoscale, generate cirrus clouds, and enhance cumulonimbus (thunderstorm) clouds.” The supporting study cited is from 1976.

Sources on Health Effects of Geoengineering

“For more than 10 years, researcher Clifford Carnicom has been valiantly and systematically reporting on the various detrimental aspects of these aerosols ­and what they are doing to our entire environment, as well as our blood.” [See www.carnicom.com and www.carnicominstitute.org.]