“In 2004, democratically elected Jean-Betrand Aristide was kidnapped by US and Canadian forces in the middle of a coup attempt and taken to “safety” in Africa.

“Aristide was elected by wide margins twice and thousands protested Aristide’s removal and demanded democratic elections that included him as a candidate.

“This is how protestors, mostly from poor neighborhoods, were treated by UN ‘peacekeepers.'” 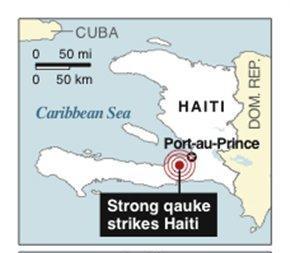 Note that 16 UN members are dead, 150 missing in Haiti’s recent earthquake. What the hell were 175+ UN Members doing in Haiti, a country of 9 million people? The short, Haiti as Invisible, answers that question. New York University’s Justin Podur: “Most of the countries of the world are involved in the occupation of Haiti.” It is retribution, he says, for the successful slave revolt of 1791-1803.

Deposed president Jean-Bertrand Aristide authored The Eyes of the Heart: Seeking a Path for the Poor in the Age of Globalization, which used Haiti as a case study of globalization. Aristide is quoted in this book review, where “Aristide specifically points out problems with the World Bank and the IMF in creating larger problems within Haitian society and the economy.”

“Do not confuse democracy with the holding of elections. Elections are the exam, testing the health of our system. Voter participation is the grade. But school is in session every day. Only the day-to-day participation of the people at all levels of government can breathe life into democracy and create the possibility for people to play a significant role in shaping the state and the society that they want.”

“Democracy asks us to put the needs and rights of people at the center of our endeavors. This means investing in people. Investing in people means first of all food, clean water, education and healthcare. These are basic human rights. It is the challenge of any real democracy to guarantee them.”

Similar to the 2009 Honduras coup, it appears multinational corporate interests, backed by the US and UN militaries, want no popularly elected rulers. Instead, they have installed a brutal regime to steal Haiti’s natural resources from the Haitians. The recent earthquake may have leveled the economic and/or political playing field somewhat, but without sovereignty, Haitians cannot implement policies good for their people. Another revolt may be on the way.