A radical reach for power, Issue 2 grants a politically appointed Livestock Care Standards Board autonomous authority over the Ohio Dept of Agriculture, the Ohio EPA, other state agencies and the state legislature. Ohioans are now voting on the Issue through Nov. 3rd.

Several documentaries, including this year’s FOOD, Inc. and Fresh, have caught the national imagination, boosting public demand for cleaner, saner, and safer food. What this means depends on who you are in the food web. Producers, consumers, product, and environment each have competing value. Who prioritizes those values is what Issue 2 is all about.

The Board of 13 will trump Ohio Revised Code and Ohio Administrative Code (OAC). They will have complete power (“exclusive authority”) to write the rules for Ohio’s livestock practices.

Rule-writing is one significant tool corporations use to circumvent law. Best management practices are defined according to those who dominate such a board. Rob Swindell explains:

“There would be no election of members, like, for example, those that are elected to serve on the Ohio School Board. Three seats on the board are reserved for family farmers and one is reserved for a county humane officer, but there is nowhere near the representation that would be required to influence the standards or represent the public.”

Under 2002 CAFO regulations, Ohio was the 7th most pollutive state in the nation. [Maps here.] The Ohio EPA explains:

“These operations generate manure, litter and process wastewater, which can contain pollutants like nitrogen, phosphorus, metals and bacteria. If CAFO operators do not manage these materials properly, they could release pollutants into the environment through spills, overflows or runoff. These releases, in turn, might pollute surface waters and threaten the health of people and animals.”

Issue 2 will allow the Livestock Board to bypass the scientific and regulatory framework already built through years of research and democratic debate.

Opponents also believe Issue 2 is Big Meat’s maneuver to prevent a victorious repeat of Proposition 2 in California. “While masquerading as an attempt to improve food safety and animal welfare,” notes Swindell, “Issue 2 in reality is an attempt by big industry to preempt statewide initiatives, which phased out problematic animal production practices like battery cages for chickens.”

And their beaks are lopped off.

The Columbus Dispatch wrote, “Don’t use the state constitution to set livestock-care rules or other detailed policies.” Ohio Secretary of State Jennifer Brunner’s office agrees in its Argument Against Issue 2:

Judith McGeary is an attorney, a farmer, and the Executive Director of the Farm and Ranch Freedom Alliance. She also opposes using the Ohio Constitution for rule making:

“Creating an unelected industry board that can override the legislature is not consistent with the concept of separation of powers and checks and balances.”

For over 30 years, the Ohio Ecological Food and Farm Association speaks for sustainable agriculture and local, organic foods. Executive director Carol Goland points voters to their OEFFA Action Page, which explains why they should oppose the measure:

“Issue 2 will create a Livestock Care Standards Board with no accountability to voters. Their decisions will be final. There is no further review or evaluation of the standard, no established forum for public comment, and no ability to appeal their decisions.

“Issue 2 serves the economic interests of factory farms, opening the door for the proliferation of Concentrated Animal Feeding Operations (CAFOs) in Ohio.”

Darol Dickinson, a Texas longhorn rancher in Eastern Ohio, condemns Issue 2 on the grounds that “inspections by a committee with a majority of city people who do not understand efficient animal production on a 5000-acre ranch should not make our financial decisions.”

Issue 2 will quash robust debate by those who write the rules now, and who are accountable to the public.

Another fear among independent farmers is that the board will require animal identification and tracking, which is nationally opposed by all but CAFOs. (Read more about the proposed National Animal Identification System here.)

The environmental catastrophes caused by Buckeye Egg Farms (bought by Ohio Fresh Eggs after Ohio revoked its operating licenses in 2003) only hint at what is to come if Ohio’s democratic process is thwarted by the emergence of an unaccountable rule making board.

Voters should reject any scheme to control our food supply that takes the public, farmers and lawmakers out of the discussion. 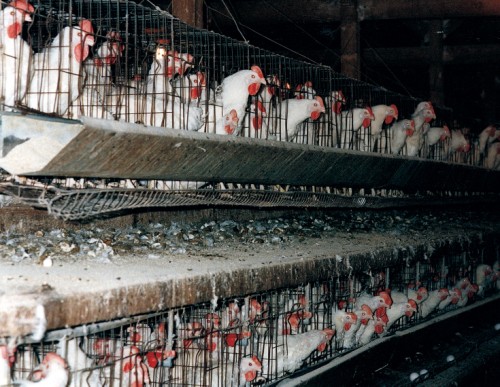 [But good luck on those undetectably hackable voting machines!]