This six-inch female weaved a web support line so strong that it impeded my opening the patio door – not by much, of course, but enough that I could feel it. The silk of Nephila clavipes surpasses the strength of Kevlar, a fiber used in bulletproof vests. And she layers it.

Webs can be up to six feet in diameter (usually 3 feet), and are very sticky. In the sun, the bright gold strands glow, attracting bees to their doom. As with most spiders, the female ingests damaged parts of the web. Unlike most spiders, N. clavipes adapts to disruption and will not likely repair frequently damaged areas. Thus, the web is rarely symmetrical.

That also means I can open the patio door without bothering her again. In this photo, the webbing can be faintly seen against the black screen: 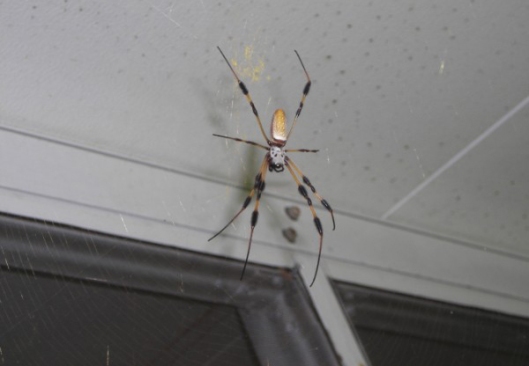 Banana spiders live in warm regions, from North Carolina and across the Gulf States through Central America, as far south as Argentina, and into the West Indies. Larger relatives occur in the South Pacific, Southeast Asia and Madagascar. The males emerge in July and the females much later, between August and October. (Hawkinson 2006) Ours arrived the end of August, here in South Florida. She’ll live one year, barring disaster.

This is Josh Hillman’s close-up dorsal view, which is much sharper than I could get on my zoom, but the pattern and texture differ on my banana spider (where the spots are bumps): 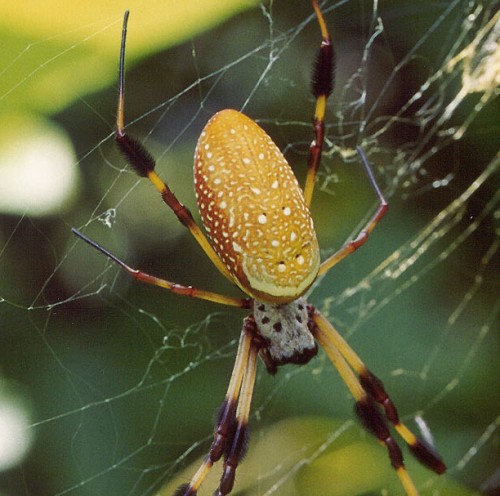 The ventral surface on our spider bears a colorful bright pattern: 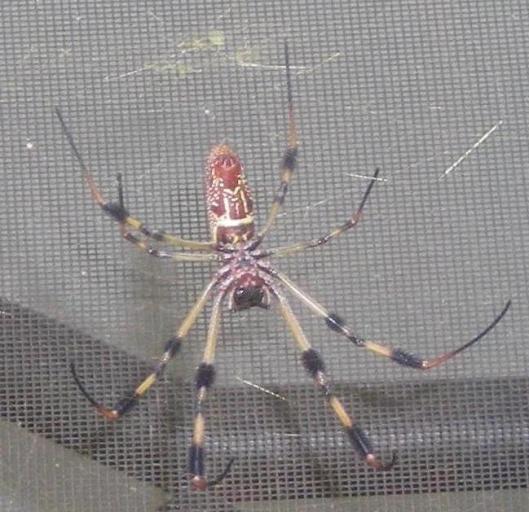 The males are much smaller, as this Hillman photo shows: 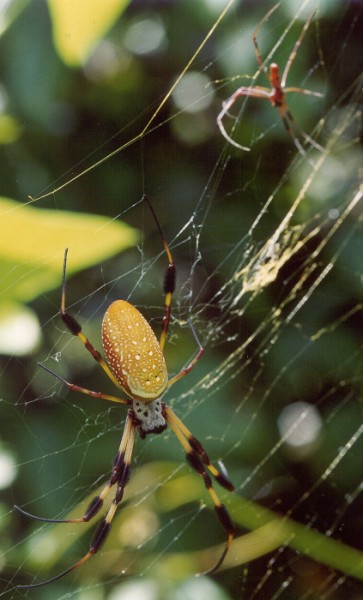 But that size difference can be extreme. In our pair, the female is about 6 inches long and the male is about 1.5″.

The next photo lets you see her size against the patio eaves. The male appears as a tiny pale clump just above the top left leg. (She’s hanging upside down, so it’s her right rear leg.)

That makes them beneficial to gardens, garden parties, and the environment (using no toxic chemicals). Altho that size is a little freaky for this transplanted Ohio gal, she’ll spend her short life with us and help with insect clean-up in this year’s garden.

After my first barely successful garden attempt down here, I learned that Florida’s growing season is September thru June. That’s the opposite of Ohio’s growing season of May thru October. Another difference in this garden will be the seeds. This time, we got ahold of heirloom seeds from South Florida, that have been passed on for generations. We’ll be trying:

I’ll let you know how my garden grows.