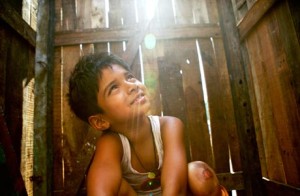 Released in the US in January, Slumdog Millionaire carefully crafts a flickering time sequence to tell the story of one boy’s pursuit of his destiny. The film is shocking – horrifying – in its graphic presentation of torture, genocide, child exploitation, and rampant corruption. Levity comes as the protagonist enters a game show to win a million dollars.

Danny Boyle’s new film solidifies his authority in capturing the subtext. The director of Trainspotting – superficially about heroin addiction in Edinburgh – disturbs audiences as easily as he enlightens them to the world according to the downtrodden. Who would think to use torture as a backdrop to a love story? Who would think that love can be defeated by the cruelty of governments, religious chauvanism, or slavers?

Can we not see our part in demonizing Muslims, in perpetrating torture and violence, in the income gap that leaves billions in poverty while a thousand billionaires plod their paths of destruction, oblivious to all but their precious profits?

Hailed as a fantasy of human triumph, Slumdog makes a more profound statement than that. By presenting these atrocities as a daily fact of life – we see the boys running from the police for playing stickball, the gender-based denigration of humanity, the unquestioned ease of police brutality, the realities of the child-slave trade, the class-based differences in general knowledge – we are forced to return to the question of prosecuting BushCo for war crimes, including torture.

We are forced to root for the street urchin, applauding the savvy sales tricks only children can use. We are forced to wonder at the neoliberal economic system that necessitates child labor.

Westerners will like the use of the game show, a popular TV distraction that captured millions of fans. The flickering time sequence unfolds as a mystery, building intensity to the final question. The music is rich and often techno.

Is it just a love story? A rag to riches story? Hardly. The subtext is the message. After all, Jamal is a boy who will swim thru shit for love.