I am a progressive populist. As a progressive, I value, work toward, and believe in an ever-expanding recognition of equality for all peoples. I have no tolerance for intolerance. Owning personal firearms levels the playing field somewhat for those most vulnerable to abuse: women, the elderly, the poor, and the handicapped.  I’m a populist because I feel no allegiance to or from elites. Instead, I fear the vast expansion of governmental power over the past decade, at the expense of the Rule of Law, and at the expense of basic human rights — particularly the 800-year-old Magna Carta provision for habeas corpus. 2A advocacy is an egalitarian issue.

“A well regulated Militia, being necessary to the security of a free State, the right of the people to keep and bear Arms, shall not be infringed.” Second Amendment to the U.S. Constitution

“To disarm the people (is) the best and most effectual way to enslave them…”  George Mason, author of the 1776 Virginia Bill of Rights

“The great object is that every (adult) be armed . . . Everyone who is able may have a gun.”  Patrick Henry, in the Virginia Convention on the ratification of the U.S. Constitution

“Waiting periods are only a step.  Registration is only a step.  The prohibition of private firearms is the goal.”  Janet Reno, former US Attorney General, 1993

“Freedom is about the willingness of every single human being to cede to lawful authority a great deal of discretion about what you do.”  Rudolph Giuliani, former mayor of New York,  1994

“The most foolish mistake we could possibly make would be to allow the subject races to possess arms.  History shows that all conquerors who have allowed the subject races to carry arms have prepared their own downfall by so doing.  Indeed, I would go so far as to say that the supply of arms to the underdogs is a sine qua non for the overthrow of any sovereignty.”  Adolf Hitler

“One man with a gun can control 100 without one…. Make mass searches and hold executions for found arms.”  Vladimir I. Lenin

“Laws that forbid the carrying of arms…disarm only those who are neither inclined nor determined to commit crimes… Such laws make things worse for the assaulted and better for the assailants…” Thomas Jefferson in Commonplace Book 1774-1776, quoting from On Crimes and Punishment by criminologist Cesare Beccaria

“Americans have the right and advantage of being armed — unlike the citizens of other countries whose governments are afraid to trust the people with arms.” James Madison, The Federalist, No. 46 at 243-244

“An armed society is a polite society.”  Robert Heinlein

Gun rights are neither liberal nor conservative, feminist nor patriarchal, Democrat nor Republican, Left nor Right. Gun rights are populist at their core, in defense against government tyranny at their widest application, and in self-defense at their most personal application.

The debate over gun rights is vast and well-documented. The basic arguments for an armed citizenry are:

The basic arguments against an armed populace ignore history or adopt a Pollyanna view toward government. Plenty of folks, on the Right and on the Left, and those in-between, recognize the value of preventive armament. We recognize that bipartisan-passed legislation over the past nine years strips US citizens of their sovereignty and destroys the Bill of Rights. (All this legislation, because it’s unconstitutional, is void, according to the US Supreme Court*.)

Some history – Jews and Other Genocides

In 1981, Morton Grove, Illinois became the first U.S. city to ban the possession of firearms. Next came Evanston, Illinois, which passed a similar ordinance without controversy.  But when the measure was proposed in nearby Skokie, it was soundly defeated.  Skokie, populated by Holocaust survivors, knew the merits of personal armament and the dangers of its lack. (Alderman and Kennedy)

Some researchers took this argument on a survey of seven nations that committed genocide in the 20th century, determining that in each instance, citizens were legislatively disarmed prior to their mass extermination by their government. In Lethal Laws: Gun Control Is the Key to Genocide, the authors demonstrated that these nations that perpetrated genocide had chosen a victim population which was disarmed.  If the intended victims were not already gun-free, then the murderous governments first got rid of the guns before they began the killing. 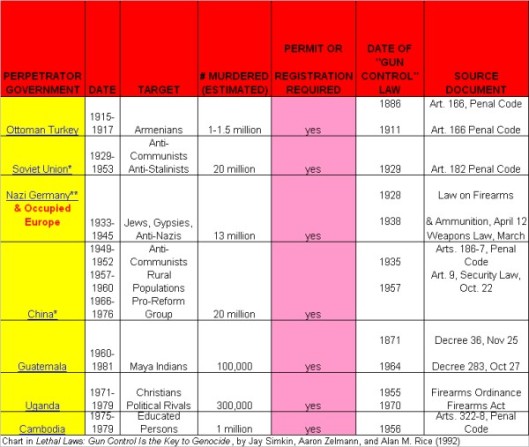 “[D]isarmament upsets the proper relationship between the master (the people) and the servant (the government) by making the people accustomed to dependence on the government. Machiavelli observed that:

“To the generation that drafted the Second Amendment, possessing arms to deter a government (or a mob which might be inspired by the government) that might contemplate mass murder was an uncontroversial moral imperative. The fact that the same message in the 20th-century book Lethal Lawsmay be considered so radical as to be not even worth discussing is perhaps one reason why genocide has become the great pandemic of the twentieth century.”

Feminists debate gun rights as hotly as any other group. Inge Anna Larish published “Why Annie Can’t Get Her Gun: A Feminist Perspective on the Second Amendment” in the University of Illinois Law Review (467, 1996). She points out that the most vulnerable members of society are most harmed by disarmament:

“Control rhetoric generally ignores the evidence that crime against the physically weaker members of society (women, children, the elderly, or the disabled) increases where guns are less available….

“The exclusion of women’s concerns in the gun control debate ignores that women are most in need of guns for self-defense.  All else being held equal, women are physically weaker than men and will continue to be victimized by men whether or not men have guns.

Moreover, unlike men, women use guns primarily for defensive purposes – most often as a last resort…. guns not only equalize the differences between men, but also eliminate the disparity in physical power between the sexes….

“Analysts repeatedly find that guns are the surest and safest method of protection for those who are most vulnerable to ‘vicious male predators.'”

“Major metropolitan and urban areas which have the greatest proportion of violent crime against women, as well as the greatest likelihood of woman-headed households, also have the most restrictive gun control measures….”

An important note on disinformation: ‘assault’ weapons is a misnomer. Semi-automatic firearms are not automatic assault weapons, as shown in this video report by San Jose police officer, Leroy Pyle:

As the banksters steal more homes and impoverish more citizens, as the multinational food-control corporations increase hunger, as computerized voting renders elections meaningless, as wealth continues to be concentrated in the hands of fewer and fewer families, civil unrest is likely to grow.  Annie, get your gun. Self-defense is inherently a natural human right.

The general misconception is that any statute passed by legislators bearing the appearance of law constitutes the law of the land. The Constitution of the United States is the supreme law of the land, and any statue, to be valid, must be in agreement. It is impossible for both the Constitution and a law violating it to be valid; one must prevail. This is succinctly stated as follows:

The general rule is that an unconstitutional statute, though having the form and name of law, is in reality no law, but is wholly void, and ineffective for any purpose; since unconstitutionality dates from the time of its enactment, and not merely from the date of the decision so branding it.

An unconstitutional law, in legal contemplation, is as inoperative as if it had never been passed. Such a statute leaves the question that it purports to settle just as it would be had the statute not been enacted.”

Since an unconstitutional law is void, the general principals follow that it imposes no duties, confers no rights, creates no office, bestows no power or authority on anyone, affords no protection, and justifies no acts performed under it..

A void act cannot be legally consistent with a valid one.

Indeed, insofar as a statute runs counter to the fundamental law of the land, it is superseded thereby.

No one is bound to obey an unconstitutional law and no courts are bound to enforce it.

Hat tip to Marti Oakley for this discussion on Constitutional Law.

18 thoughts on “A Progressive View on Gun Rights: 2A All the Way”