Scrappy, a female, at three months of age.

At first, I thought we uncovered gay cockatiels within our avian population. Now I know they are lesbians.

During a cold snap, all eight birds had to be captured and caged, then rolled into the house, and into a warm back room. I put six in one cage and a mated pair in the other, much smaller cage. The stress must have thrown off the mating dynamics (cockatiels are reportedly monogamous for life). The pair bonding changed.

Maybe removing the whiteface platinum pearl hen from her yellow-white albino mate (also called pied) caused the disruption. (None are lutinos since all have black eyes, according to one breeder. Also see a more detailed discussion of mutations.) When we brought the pearl back from a trip to a handler, I found one of the natural gray cockatiels mounting the male albino! All along we thought the mute albino was male – but there s/he was chirping merrily as the big gray danced back and forth while thrusting lustily.

Immediately, I called my father to tell him he now had two gay birds. He said, “That’s it. You’re not taking care of the birds anymore!”

Sexing Nymphicus hollandicus is easy among the natural gray variety: the males have yellow faces and bright orange cheeks and the females have gray faces and muted orange cheeks. The undersides of female tails are striped or spotted, whereas on males, the colors are solid. The males sing and talk; the females chirp.

Two females squat above the male. The female lacking a plume is mated to this male, who pecks off her head feathers during sex.

But sexing them becomes problematic among the color-bred varieties, like the whiteface platinum pearl below:

Whiteface platinum pearl, with striping beneath her tail feathers.

We have six natural cockatiels plus two that have been color-bred (the pearl and the albino). The color-bred pair joined the flock after it was already established, when a friend didn’t want them anymore. I’ve always figured they were at least a year or two older than the rest of the population – they’re not as active or talkative. In fact, the yellow albino was mute, as far as I knewl, but this all changed after the big gray mounted him (her?).

Based on my Google search so far, the underside of the tail feathers on all cockatiel females is striped or spotted; on males, the colors are solid. On an albino, we can’t tell this way.

I’ve been trying to film them mating, but my camera is nearly always more interesting to them than sex or eating. They’d rather whistle and pose. (Well, the females tend to dive bomb me if I bother them, so that’s another camera-deterrent.)

The pearl – which I’m 99% sure is a hen – squawks and screams. She sounds more like a parrot compared to the sweet sounds of cockatiels (altho, they all can be very loud). She’s also our biggest bird – much larger than her albino mate.

Busting up a monogamous pair is not a sharp, distinct process, if that’s what’s happening. The pearl seems to be fighting for the albino – but only thru proximity, not by pecking or dive-bombing. Today, while the big gray mounted the albino, she flew to them and hopped on either side of them, and behind them. She watched and made her presence known, but she did not peck anyone.

That gray cock has also taken to mounting the pearl. The albino pays close attention (photo below). The pearl squawks loudly when mounted and though she sounds angry, she is not: she could refuse sex; she is bigger than the big gray. I think she just has a different song – probably a genetically unintended result of color-breeding. 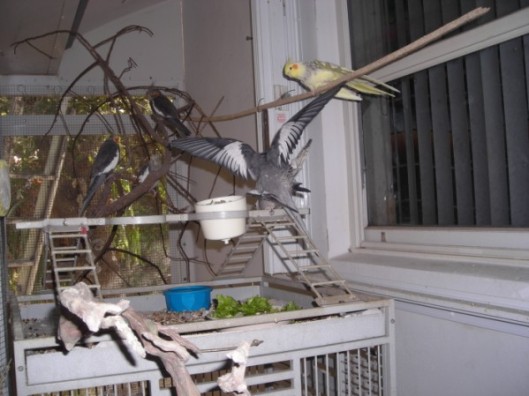 Males use their wings for balance during sex, as the female usually wiggle about. Hard to see the mounted female here, but the albino (yellow) female is watching the action and commenting.

Another behavior relevant to all of this is that I have never observed the color-bred pair mount each other. They stick together, eat together, fly together and often sleep next to each other, but neither has mounted the other in my presence.  I read that lesbian cockatiels will produce unfertilized eggs, but unless that egg hatches, how would I know if it was fertilized or not?  (How would I know which eggs came from which pair without serious technology and time?)

As to the sex of the color-breds, I’m now tending to think they are both females, and perhaps enjoyed a monogamous lesbian bond for several years.  For some reason, perhaps as a result of stress and separation, they have opened their relationship to a male who now services both of them.  Whatever their gender, they’ve taken on a pet male, but only this one: 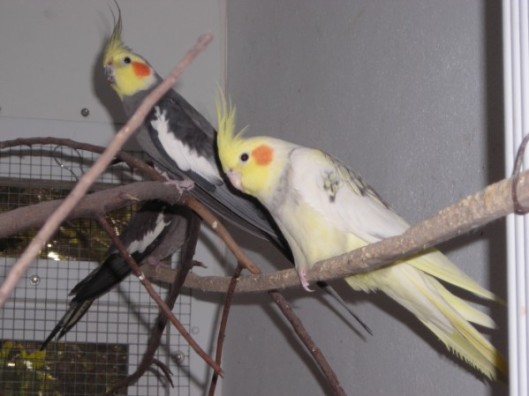 Closely observing this flock, I’ve learned that cockatiels don’t need a nest box to encourage mating.  Once we put wood chips on the floor, everyone got active – as if we had lined the ceiling with nesting boxes.  I’m also now sure that cockatiels aren’t just pair-bonded; they can also have closed triads.  I guess there’s a good reason why the genus is called ‘Nymphicus.’

While I try to ascertain the sex of the albino, I’m meeting some maternal need to tend-and-befriend.  I can’t help but imagine the harmony if religious boys quit resisting marital rights for gays and lesbians.  We might move the battle line from marriage equality to world peace, or some other noble battle that needs our attention.

After all, what safe, sane and consenting adults do in the realm of love and sex is their natural born right; and sexual diversity in over 400 species is well documented.