On his June 3, 2011 passing, see Kevorkian’s call to defeat the cacocracy

Loving compassion for terminally ill patients drives 81-year-old Dr. Jack Kevorkian, but his advocacy is fierce and dramatic.  He spoke before an audience of 2,500 at a South Florida university on February 5th.

After comparing U.S. society with each of Laurence Britt’s Fourteen Points of Fascism, Kevorkian revealed his view of a more honest American flag: 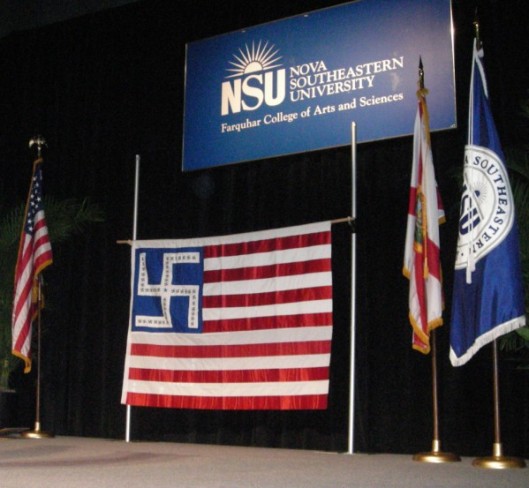 The audience reacted with audible shock to the swastika, prompting one man to yell, “They should use the machine on you!”  Kevorkian designed machines that allow the terminally ill to end their lives.  Protestors disrupted his speech twice by marching in and out en masse.

Unperturbed, Kevorkian maintained a sense of humor.  During the question period, someone asked, “What do you think happens after someone dies?”  He answered, “They stink.”  The audience laughed and applauded.  Several times, Kevorkian earned applause as people showed their support of an individual’s right to determine the manner and timing of his or her death.

The freedom to die has gained much media attention lately.  In December, a Montana court upheld iatric euthanasia (physician assisted suicide).  In November, the State of Washington voted for the right to die, joining Oregon.  In March of last year, Luxembourg legalized it.  Also in 2008, a highly publicized case in Italy ended after ten years when the courts finally allowed a man to remove the feeding tubes of his daughter who had been in a coma for 17 years.  A documentary on the right to die aired in Britain in December (see video below for footage and an interview of the director).

Kevorkian admits to euthanizing 130 patients.  Though unsuccessfully prosecuted for several of them, the one that earned him an eight-year prison sentence was his televised broadcast of Thomas Youk’s death in 1998.  The 52-year-old had ALS, a progressive, usually fatal, neurodegenerative disease.  Physicist Stephen Hawking suffers from ALS, and baseball Hall of Famer Lou Gehrig died of it in 1941.

Youk was physically unable to self-administer the lethal dose, but provided fully-informed consent to Kevorkian to end his life.  The Michigan justice system violated his 9th amendment rights when prosecuting Kevorkian for what many deem to be the highly ethical and compassionate act of a trained physician.  Just as we euthanize our terminally ill pets, Kevorkian argues that humans have the natural right to demand the same.

In defending against that first degree murder charge, Kevorkian had hoped the US Supreme Court would hear his 9th Amendment defense.  SCOTUS declined, a cowardly move that Kevorkian called corrupt and unethical.  In Amendment IX: Our Cornucopia of Rights (Penumbra Press, Bloomfield Hills, MI, 2005), which he wrote while in prison, Kevorkian stated:

“Without a doubt the Court’s insouciance and trepidation are welcomed and encouraged by extremely powerful lobbies representing antagonistic and self-serving financial, medical, pharmaceutical, governmental, and religious organizations.  Despite the enormous pressure they and their economic and political clout can exert, a really dedicated, stalwart, and ethical Court would be doing its noble duty as the ultimate guardian of our innate natural rights by being perpetually and single-mindedly focused on the people’s welfare….”

After his release from prison in June 2007, Dr. Kevorkian began a speaking tour that included Harvard Law School last October, where famed Alan Dershowitz introduced him with high acclaim.  Praises aside, murderous zealots who seek to impose their religious beliefs on others have apparently targeted Kevorkian.  Police and security formed a large presence inside and outside the Nova Southeastern University arena.  Attendees endured a search of their bodies and purses and relinquished all drinks before entering the arena.  When confiscating my coffee, one officer explained, “You might have acid in that drink.  We don’t know.”

Unusual for NSU’s Distinguished Speaker Series, and contrary to the printed program, no one introduced Dr. Kevorkian.  Poor acoustics suppressed his message for the upper tier, half of whom left early when part of the audio system failed.  Adding to further difficulties for the audience, at the end, handicapped seniors were required to climb to the second floor to exit the arena, instead of leaving through the doors on the first floor that were blocked “for security reasons.”

Kevorkian had a little trouble articulating his thoughts during the speech, which never directly mentioned iatric euthanasia.  His acumen distinctly showed during open questions, though, when he finally connected for the audience the three admitted passions in his speech to the freedom to die:

For Kevorkian, the damage to personal liberty by a tyrannical government includes the suppression of our inalienable right to die, but it doesn’t stop there.  A justice system based purely on punishment warps prisoners and destroys families.  An education system that fails to teach its citizens about personal liberties and the nature of tyranny ensures the demise of a free society.  To regain the right to die, or any natural right, all three institutions – government, justice, and education – must be reformed.

Given that much of the audience was shocked by easy comparisons between Nazi Germany and the modern United States, advocating for education reform is indeed wise.  Kevorkian hammered at the Patriot Act and Homeland Security Act, which he compared to Hitler’s 1933 Enabling Act. He scolded the audience for allowing their inalienable rights to be forfeited in exchange for security.  “You are letting the government spy on you because you aren’t in the streets protesting about it.” Benjamin Franklin once observed, “Those who sacrifice liberty for security deserve neither.”  Yet, these ideas are mere abstraction to today’s youth, where even elite colleges fail to properly educate their students in civics.  Instead of the Pledge of Allegiance, Kevorkian would prefer students recite the Bill of Rights.

The Netherlands, Switzerland, Luxembourg, Belgium, and the U.S. states of Oregon, Washington and Montana specifically permit iatric euthanasia.  Britain is again debating the issue after it aired Oscar-winning director John Zaritsky’s The Suicide Tourist (under the rename, The Right to Die) in December.  Prime Minister Gordon Brown voiced his opposition to legislation allowing it, but affirmed his support of personal choice.  This video interview of Zaritsky opens with footage from The Suicide Tourist:

Zaritsky raises the issue of our inalienable right to commit suicide – whether ill or not.  Kevorkian considers laws that ban suicide and iatric euthanasia “worse than immoral.  They are downright illegal.”

In Cornucopia, Kevorkian defends the Ninth Amendment as “the twenty-one most important words in the U.S. Constitution.”

The enumeration in the Constitution, of certain rights, shall not be construed to deny or disparage others retained by the people.

Human rights are not limited to those named in the Constitution, and laws that block those rights are unconstitutional.  Just as a woman has a natural born right to abort a fetus, and everyone has a natural right to choose whom to love and marry, all humans have a right to choose the timing and manner of their own demise.  In Cornucopia, Kevorkian details several natural rights that he deems the “hallmark of a truly enlightened democracy.”  He prefaces them with:

“The first one listed below subsumes all the others which are mere corollaries, and its emphasized qualifying admonition also pertains to all of them.  Therefore, I have a basic natural right:

Dr. Jack Kevorkian’s compassionate and common sense approach to ending human suffering is but one facet of his decades-long advocacy of the Ninth Amendment.

Like Henry David Thoreau, Nelson Mandela, and Aung San Suu Kyi, Kevorkian was wrongfully imprisoned for advocating human rights.  He warned the audience, “To be active, you must be committed.  To be committed is dangerous.”  That is especially true in a police state with the highest incarceration rate in the world.

For more information, see this partial international list of right-to-die organizations or this one.  Also recommended is Susan Stern’s 2005 award-winning documentary, The Self Made Man.

This article cited in the Tampa Bay Examiner.

4 thoughts on “Kevorkian: The Right to Die and Other 9th Amendment Freedoms”