On Tuesday, nationally renowned child advocate Cindy S. Lederman of the 11th Judicial Circuit (Miami-Dade County) granted adoption of two children to Martin Gill, a gay man who has fostered them for four years, along with his partner.  The court ruled Florida’s gay adoption ban unconstitutional, calling the state’s arguments “not rational.”  The State has appealed the decision.

Martin Gill told news reporters, “I wasn’t here to make history.  I was here trying to do the best thing for a four-year-old and an eight-year-old that have been in my custody for four years.”

The American Civil Liberties Union assisted Gill in his petition and provides the following video:

The ACLU reports that Martin and his partner of eight years built their lives around their three children (one natural and two adopted).  Because they both work in the travel industry, they are able to arrange their schedules so that at least one of them is always at home for the children. 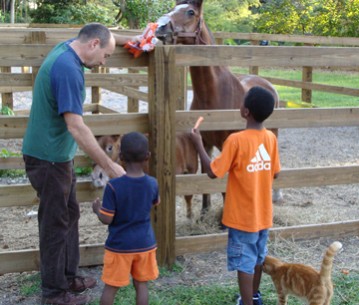 Parental presence is one concern of Judge Lederman, a fierce child advocate who gained national attention in 2003 when she launched the Miami Safe Start Initiative, with the help of Dr. Joy Osofsky, an expert in early child development.

NPR called the initiative, “some of the most innovative intervention programs for young mothers and infants in the dependency-court setting today.  Recognized by child welfare experts as ‘pioneering,’ the Lederman programs are court-initiated, court-administered and aimed at helping babies and toddlers as soon as they come into the dependency court system.

The centerpiece of the court’s initiative consists of 25 weeks of intensive, one-on-one therapy between mothers and their babies, and also includes other parent-support services such as transportation, school and job placement, developmental screenings for all infants and toddlers and the first court-based Early Head Start program in the country.”

Judge Lederman’s experience with child development experts played heavily in this case.  She noted, “There’s no rational basis to preclude homosexuals from adopting,” overturning the 31-year-old discriminatory law.  “I find that the law prohibiting gay adoptions violates the children’s right to equal protection.”

Gill provided five experts to testify on the damage Florida’s gay adoption ban would cause, and to refute State testimony on alleged harm done to children by having gay parents:

* Dr. David Brodzinsky testified that being removed from this family would be “emotionally devastating” for the children and would cause them long-term damage.

*  Dr. Michael Lamb testified that 40 years of scientific research reveal uniform findings; not a single one of these studies found an elevated rate of adjustment problems among children raised by gay parents.

*  Dr. Lamb also testified that research on gay parent families uniformly found that the healthy development of children raised by gay parents isn’t harmed by societal prejudice against their parents, and that children of gay parents are no more likely than other children to experience peer rejection or teasing.

*  Dr. Lamb also testified that while research shows that children in two-parent families are more likely to be well-adjusted than children raised in single-parent families, it also shows that this disparity is about the number of parents, not the gender of the parents.

“As a result, based on the robust nature of the evidence available in the field, this Court is satisfied that the issue is so far beyond dispute that it would be irrational to hold otherwise; the best interests of children are not preserved by prohibiting homosexual adoption….

“Moreover, the statutory exclusion defeats a child’s right to permanency as provided by federal and state law….”

Florida was the only state to ban gay couples from adopting.  Mississippi bans single gays from adopting (but not couples), and Arkansas and Utah don’t allow any unmarried couples to adopt.  Arkansas voters reportedly passed this ban on November 4th.

Lederman granted the Petition to Adopt the day before Thanksgiving, providing the Gill family – and the nation’s minority homosexual population – with more cause for giving thanks.