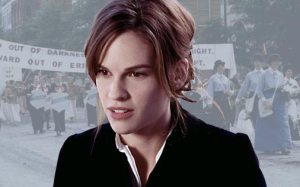 With a potent title like that, this film had to be worth the watch. As I settled in, to my delight I realized it was about the latter day suffragists (1914-1920). Iron Jawed Angels recreates the tenor and passion of the decade before the 19th Amendment was passed, focusing on the charismatic and radical leader, Alice Paul (Hillary Swank). 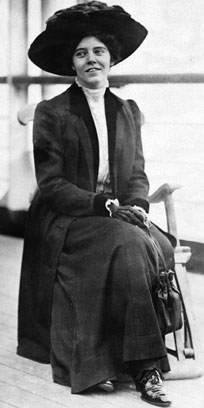 With a potent title like that, this film had to be worth the watch. As I settled in, to my delight I realized it was about the latter day suffragists (1914-1920). Iron Jawed Angels recreates the tenor and passion of the decade before the 19th Amendment was passed, focusing on the charismatic and radical leader, Alice Paul (Swank).

A Brief Herstory of Voting

Women voted in most of the American Colonies, except in four that specifically excluded them. In New Jersey, woman suffrage lasted from 1664 to 1807, and in Massachusetts from 1691-1780. As with men, restrictions applied but were not uniformly enforced. Indisputably, more restrictions applied to women than to men. [1]

In the heady days after defeating the English in 1783, States frantically rewrote their laws specifically disenfranchising women. By 1807, all states had rescinded their right to vote. What was good for the gander was apparently not good for the goose.

In 1792, Mary Wollstonecraft wrote her seminal book, A Vindication of the Rights of Woman, which inspired the American suffrage movement. Later leaders organized a national conference in 1848 and began winning back the franchise, state by state. Starting in 1869 in Wyoming, and 1870 in Utah, American women again enjoyed the franchise. 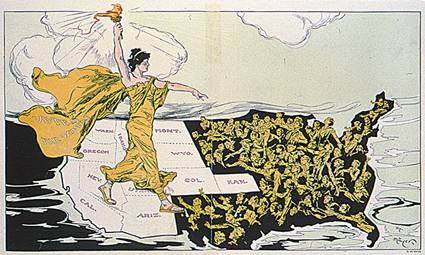 In the 71 years following the Seneca Falls Convention, Western states yielded to suffragist demands. Prior to passage of the 19th Amendment to the US Constitution in 1919, women voted in 26 states, but only in federal elections in 12 of them.

Iron Jawed Angels takes a tiny slice of this history, focusing on 1914-1920. Using the internecine conflicts over money and strategy as the backdrop, it highlights the lives of several key figures: Alice Paul and Lucy Burns, primarily, along with their cohorts, Inez Mulholland, Molly Parker, Doris Stevens, and Mabel Vernon.

The National Women’s Party formed to force the issue of suffrage in a single national Constitutional Amendment, breaking from Carrie Chapman Catt’s state-by-state campaign (organized thru the National American Woman Suffrage Association – NAWSA). Angels does not present Catt in a positive light, but Angelica Huston adeptly portrays the haughty character.

There was a quote I read many years ago: ‘freedom is the sound of opinions clashing.’ And I think that’s something we’ve gotten very far away from in our country, that hopefully our film will help inspire that kind of lively debate, people stepping up and being passionate. 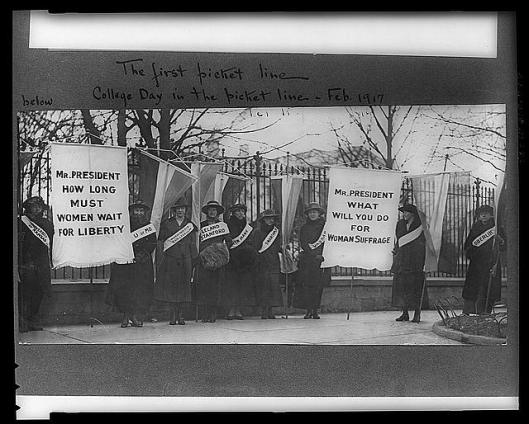 That historic passion is captured – on both sides of the debate. The film exposes the hypocrisy of “spreading democracy over there” as the US entered World War I, when a great bulk of its own citizenry lacked the franchise. Angels also exposes the private and institutional violence perpetrated against women for demanding the vote.

The Night of Terror, and Other Tortures

Iron Jawed Angels shows some of the violence suffragists endured, but downplays the most brutal episode, the Night of Terror. After picketing the White House, as shown in the photo above, hundreds of women were arrested, and 33 convicted. On the night of November 15, 1917, according to Barbara Leaming in Katharine Hepburn:

“Under orders from W.H. Whittaker, superintendent of the Occoquan Workhouse, as many as forty guards with clubs went on a rampage, brutalizing thirty-three jailed suffragists. They beat Lucy Burns, chained her hands to the cell bars above her head, and left her there for the night. They hurled Dora Lewis into a dark cell, smashed her head against an iron bed, and knocked her out cold. Her cellmate, Alice Cosu, who believed Mrs. Lewis to be dead, suffered a heart attack. According to affidavits, other women were grabbed, dragged, beaten, choked, slammed, pinched, twisted, and kicked.”

The film glosses over this brutality, showing only a few men (not 40) roughing up the women and chaining Lucy Burns’ hands over her head. However, Angels does not ignore the torture when the suffragists staged a food strike.

A variant on water-boarding, and equally repugnant, is force-feeding, from which this film derives its title. Graphic attention is paid to the tubed force-feeding and Alice Paul’s resistance, along with others. When they are unable to keep their mouths closed, the forced feeding induces them to vomit. Later we see the bloody remains of their lips, and their weakening state, until press exposure wins public support. The women are immediately released and President Wilson urges Congress to pass the 19th Amendment.

Inez Mulholland (Julia Ormond) dies in the film, from anemia, as she did in real life, coming to be known as the Suffrage Martyr.

History fans will love the film as much as herstory fans: woman suffrage is an important episode in the struggle for universal equality.

[1] Most historians only mention New Jersey or other “progressive colonies,” or they absurdly assert that while women had the right to vote, they didn’t act on it. Since paper was a rare and precious commodity during Colonial times, voting was done by voice, and few communities maintained voting lists that remain extant. Without such primary sources, we are left to rely on secondary sources such as this 1864 Address, mentioning that Lydia Chapin Taft voted in 1756 in Massachusetts.

One historian refers to “the New Jersey experience” as if it alone, among all the colonies, included woman suffrage. He seems baffled that NJ expressly enfranchised women in its first constitution (1787), apparently unaware that it merely codified a 123-year-old practice.

Another bias that a ppears in many historical accounts of voting in America is widespread silence on the fact that blacks, indigenous people, and resident aliens (non citizens) also voted in Colonial times, and in some states after independence. As with white males, restrictions applied but were not uniformly enforced.