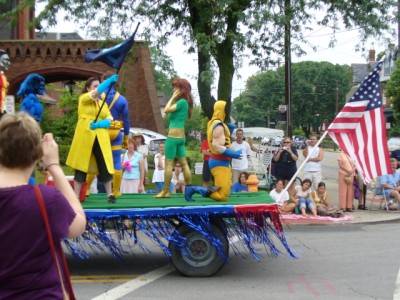 Columbus, Ohio’s whacky Doo Dah Parade is the Left’s answer to Red White & Boom, the official celebration of our independence. Thru silly costumes and messaging, the real message is imparted with humor. Maybe next year, we’ll celebrate the demise of the Bush junta, the end of resource wars, a new reign of citizen-run paper ballot elections, and the restoration of our Constitution. Now, that would be difficult to make silly.

Doo Dah set a record this year for lasting 65 minutes, marching past thousands who brought their chairs to the sidewalks.

Local media whines that Doo Dah has become too politicized, as if our independence is so assured, while Congress supports torture, spying on citizens, resource wars and the expansion of executive power. Silly media. We all have to be silly for Doo Dah, so political messages are imparted with humor.

There are some rules, though. Any self-promoting politician must wear a ridiculous hat, on pain of arrest by the Doo Dah Police who drive around in tiny, tiny, black-and-white striped vehicles. Paraders must wear costumes and no one can be completely naked (altho a few push this envelope to the technical limits of compliance).

To impart the need to protect all Earth’s species, a truck promoted a faux organization, PALE: Protect All Life’s Extinctions. Each crew member dressed as an extinct species, cajoling us to “double the Do Do population” and provide habitat for dinosaurs.

Recognizing the lack of distinction between corporate-sponsored Dems and Repubs, Columbus’ Rocky Horror Picture Show cast reminded us that “Rocky Goes Both Ways: Dem and Repub”. A “Flush Bush” sign hung from a car that mocked his Godzilla grab for imperial power. Other signs showed the Constitution and Declaration of Independence being shredded.

One float addressed the recent theft of personal identifying information from a State database. A man stood on top throwing sheets of paper onto the crowd which symbolically contained personal info.  Really makes you want to support a statewide voter registration database, hmm?

I marched in the lead group – tuneless musicians. Truly, tho, only rarely did the brass section hit a false note. We performed New Orleans’ style, acknowledging the death of a local musician’s pub, Little Brothers. To maintain the silliness requirement, at one point, we marched backward, singing Dah Doo, Dah Doo. The lead organizer, scantily clad Jim Maneri, twirled a broom.

Perfect weather held until the last float crossed the finish line. A downpour of great intensity then drenched us, ending the life of my 12-year-old bongo. In perfect irony, on its last day, it was played to the funeral march, When the Saints Go Marching In.

Maybe next year, we’ll celebrate the demise of the Bush junta, the end of resource wars, a new reign of citizen-run paper ballot elections, and the restoration of the U.S. Constitution. Now, that would be difficult to make silly.

2 thoughts on “Doo Dah Does Democracy”